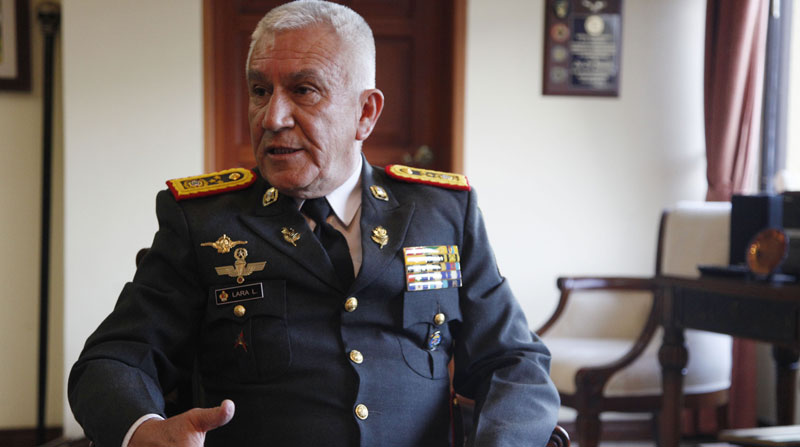 The head of Ecuador’s armed forces on Tuesday denounced as a “grave threat” to democracy the wave of Indigenous-led fuel price protests that have triggered regional states of emergency and a curfew in the capital Quito.

On the ninth day of protests that have seen roads barricaded countrywide, cost the economy tens of millions of dollars and left dozens injured, Defense Minister Luis Lara warned that the armed forces “will not allow attempts to break the constitutional order or any action against democracy and the laws of the republic.”

“Ecuador’s democracy faces a grave threat from the concerted actions of agitated people who are preventing the free movement of the majority of Ecuadorans,” charged Lara, flanked by the heads of the army, navy and air force.

President Guillermo Lasso on Monday extended a state of emergency to cover six of the country’s 24 provinces as he sought to curtail the demonstrations.

The powerful Confederation of Indigenous Nationalities of Ecuador (Conaie) — credited with helping topple three presidents between 1997 and 2005 — called the countrywide protests as Ecuadorans increasingly struggle to make ends meet.

Indigenous people comprise more than a million of Ecuador’s 17.7 million inhabitants, and their movement has since been joined by students, workers and others feeling the economic pinch.

Police said Monday 63 armed forces personnel have been wounded in clashes and 21 others briefly held hostage since the protests began, while human rights observers reported 79 arrests and 55 civilians wounded. 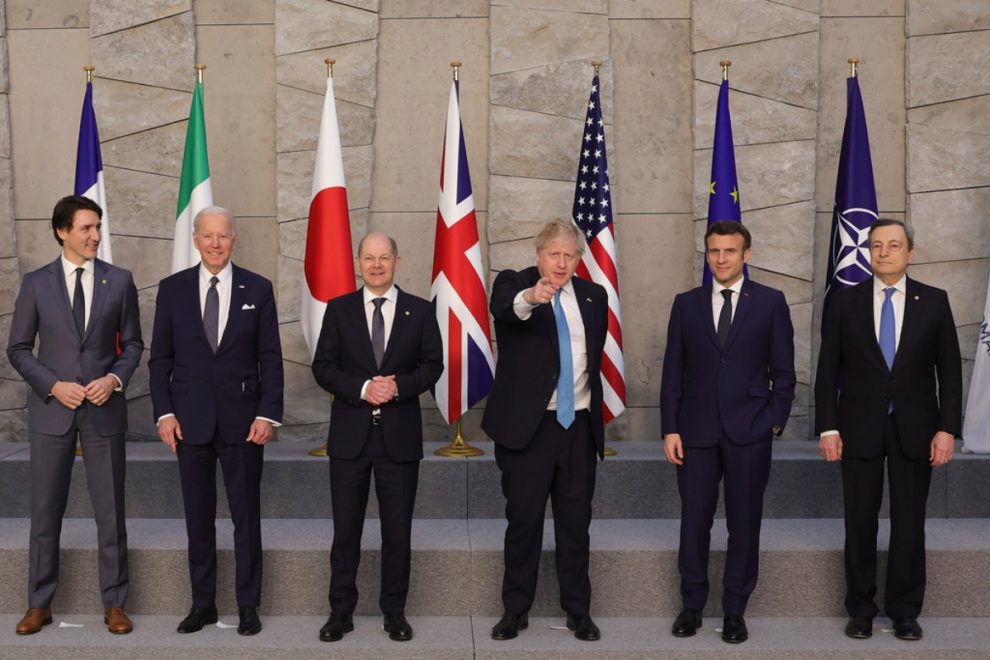 The latest moves “strike at the heart of Russia’s ability to develop and deploy weapons and technology used for Vladimir Putin’s brutal war of aggression against Ukraine,” the US Treasury Department said in a statement.

The sanctions target state company Rostec and other firms critical to the defense industry, as well as military units and officers implicated in human rights abuses in Ukraine, Treasury said.

“We once again reaffirm our commitment to working alongside our partners and allies to impose additional severe sanctions in response to Russia’s war against Ukraine,” Treasury Secretary Janet Yellen said.

“Broad multilateral commitments and actions by G7 members this week further cut off the Russian Federation’s access to technology that is critical to their military,” she said, which will “degrade Putin’s capabilities and further impede his war against Ukraine.”

The moves blacklist 70 entities and 29 individuals, which freezes any US-held assets and prohibits them from doing business with or conducting financial transactions with US institutions.

United Aircraft Corporation (UAC) is on the list as Washington aims to “weaken Russia’s ability to continue its aerial assault on Ukraine,” the statement said.

In addition, the United States is seeking to crack down on Russians seeking to skirt existing sanctions by “covertly” acquiring US, Japanese and European defense components.

Also as part of the G7-agreed sanctions, the United States banned imports of gold from Russia, the country’s biggest non-energy export, Treasury said. But the move excludes gold already held outside of Russia. 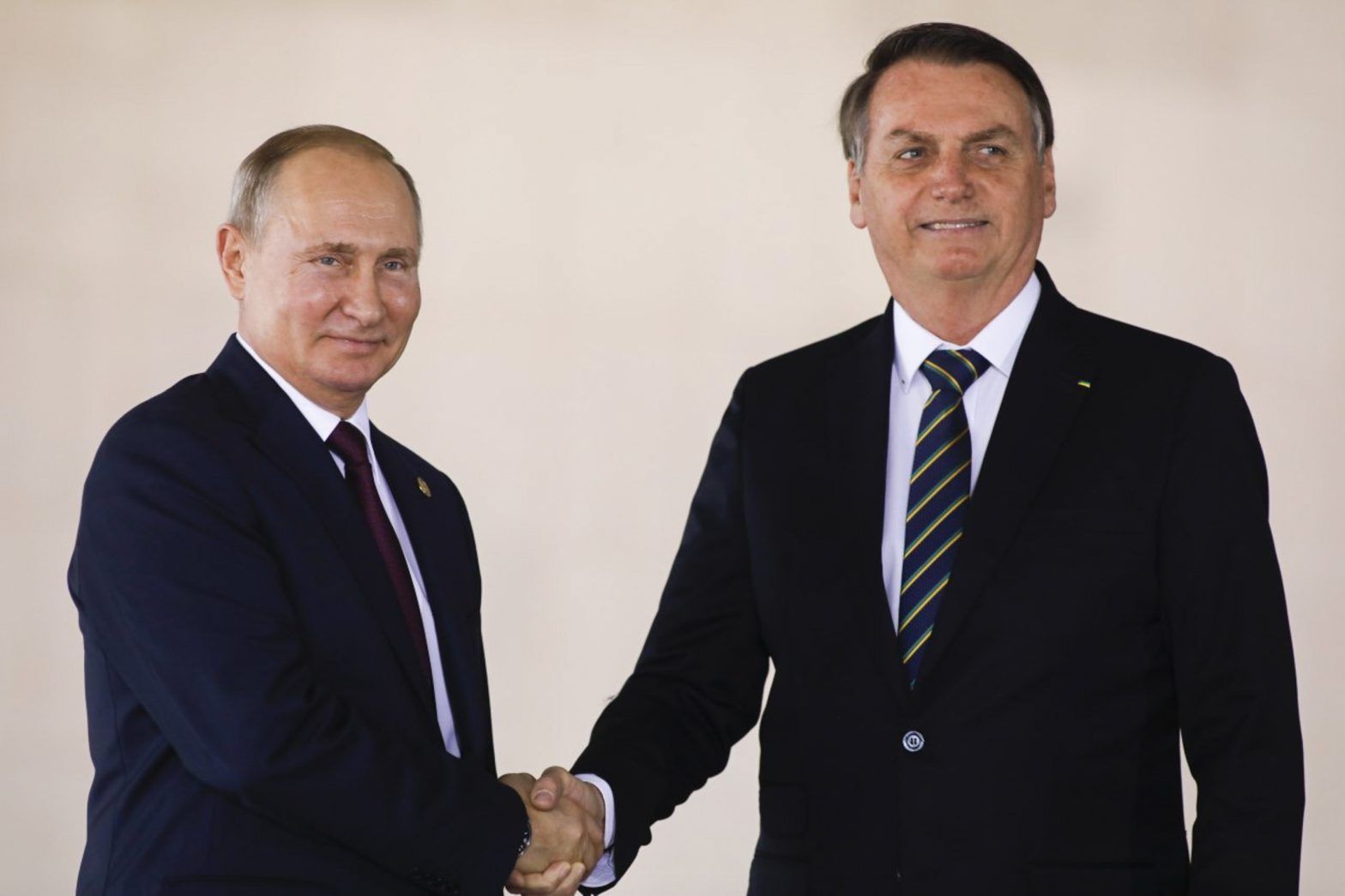 Russian President Vladimir Putin on Monday promised his Brazilian counterpart Jair Bolsonaro that Russia “is committed” to maintaining its delivery of much-needed fertilizers to the South American agricultural giant.

In its own statement on the conversation, the Kremlin said Putin “stressed that Russia is committed to carry out its obligations to guarantee the uninterrupted delivery of Russian fertilizers to Brazilian farmers.”

The statement added that Putin asked for “the restoration of the architecture of free commerce of food products and fertilizers that have collapsed due to Western sanctions” against Russia over its invasion of Ukraine.

A global agricultural power, Brazil imports more than 80 percent of its fertilizers — a figure that rises to 96 percent in the case of potassium — according to the agriculture ministry.

More than 20 percent of those fertilizer imports come from Russia.

But the Western sanctions imposed on Russia over the invasion of Ukraine, which began in February, sparked fears in Brazil that its supply of fertilizers could be affected.

Bolsonaro’s government also announced the start of negotiations with alternative suppliers, mainly Canada, Jordan, Egypt and Morocco, while adding that domestic production would be increased. 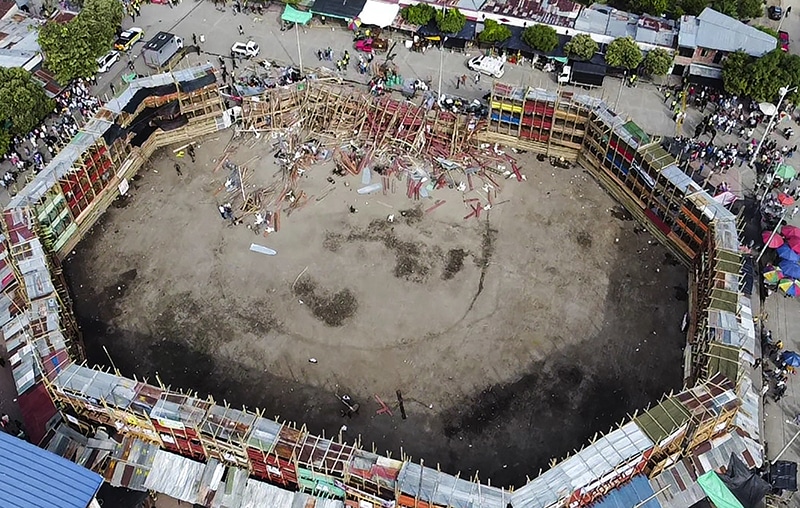 A toddler was among four people killed when the grandstand at a bullring in Colombia collapsed, injuring hundreds of others, officials said Monday.

One person died at the scene and three died in hospital, according to Juan Carlos Tamayo, the mayor of El Espinal, the central city where the collapse happened on Sunday.

The fatalities included a toddler of 14 months, Tamayo said.

Martha Palacios, health secretary in the department of Tolima, said 322 people were treated at various hospitals, of whom four were in intensive care.

People were taking part in a so-called “corraleja” — where members of the public face off with small bulls — when a three-story section of wooden stands holding spectators collapsed.

Attendees were hurled from their seats into the arena, where at least one bull was running around, according to drone images.

The event, on a holiday weekend, was part of celebrations for the festival of San Pedro, the most popular in the region.

“Our bullring is made up of 44 stands of which eight fell, each with 100 people,” said Tamayo.

“I saw people amid the rubble, others trying to get out, very difficult,” Samuel Galindo, a neighbor who recorded the tragedy with a drone, told the AFP.

President Ivan Duque said on Twitter he would order an investigation, and expressed his solidarity with the victims and their next of kin.

The governor of Tolima department, Jose Ricardo Orozco, said the regional government would move to ban the corralejas, saying they were dangerous and promoted animal abuse.

On Saturday, several people were injured in at the corralejas in El Espinal, a city of some 78,000 people about 150 kilometers (93 miles) from the capital Bogota.

Another person died earlier this month after being gored by a bull during a corraleja in the town of Repelon.

President-Elect Gustavo Petro, who will take office on August 7, joined Orozco in calling for the amateur bullfights to be banned.

When he served as mayor of Bogota, leftist Petro put a stop to bullfights in the city’s signature bullring, La Santamaria.

“I ask the mayors not to authorize any more events with the death of people or animals,” he said on Twitter Sunday, wishing the injured a speedy recovery.

While animal abuse is a crime in Colombia, bullfights and cock fights are protected as a cultural inheritance.